Yup, there is a cute museum at the Great Zimbabwe Monument, no pics I’m afraid, its strictly forbidden.

In the main section are scaled reconstructions of the ruins; history, artefacts found over the years, and then at the far end, a sort of cave with the Zimbabwe bird and the other sculptures found at Great Zimbabwe. Most of them were taken away, some to Germany, others to Capetown, although all but one, have been returned. Each one as a number assigned to it and a description of sorts. I can find no images of them on the internet, and I wish the museum, since they forbid photos, would produce a catalogue for visitors. A curator, who is probably a policeman too, stood at one side, checking we didn’t take any pics, or nick the Zimbabwe Bird.

Since I couldn’t take pics of the real one, I’ve inserted a stone sculpture by Arlington Muzondo; his version of a Zimbabwe Bird!!!! Arlington originally comes from Masvingo area, where he was born in 1974. Who knows, maybe he is descended from the people who carved the stones in the museum.

This sculpture, and about 35 others will be on his exhibition on the 22nd May 2016. Below is a detail of the lovely colours in the stone…

Directly opposite the soapstone display, in the Great Zimbabwe Monument museum, is a glassed display containing several smaller artefacts found at the Ruins. One, an object that looks sort of like a cow, but with lots of openings dotted about on its body.  Apparently the spirit medium makes a fire in there and divines depending on how the smoke goes…The curator told us its a very sacred, holy object and that if one should breathe in the fumes when lit, “things wouldn’t go well for you.”

Since I am unable to use the poster of the conical tower in the museum, I’ve put up one of my own. Can you believe the gargantuan effort that went into building THIS? And its just solid stone…it is not functional!

“Yes, I think you are right. Definitely phallic symbols, made by men, to symbolise their dominance. They have to you see.”

Clearly, the guy was puzzled. “They have to?”

“Yes, of course. Women don’t need to go around building huge symbols in a desperate effort to demonstrate their power, they already know they are powerful. You see, women don’t need men.”

Clearly, a rather radical idea such as this, spoken so confidently, had never occurred to him, nor that twenty-four out of twenty-five men are redundant.

He most certainly couldn’t accept that a world run by women (with a few men allowed for fertilisation purposes) could possibly work.

It sure would be a very, very different one to that which we have today.

Would it be a better world? Who knows?

I imagine a long ago artisan shaking his head over the deplorable standards of the younger generation! 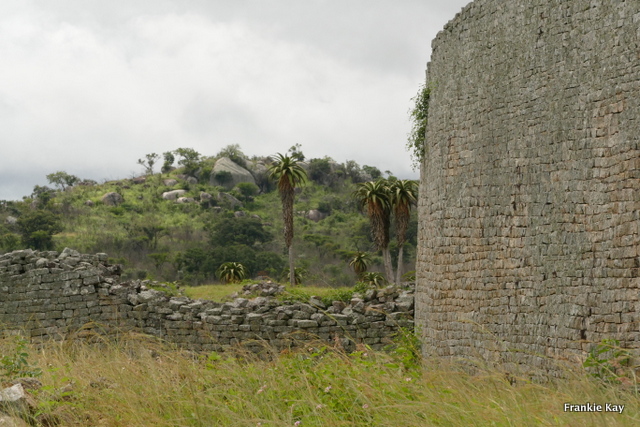 The walls are massive in the Great Enclosure, at Great Zimbabwe. In this pic (below,) one can see the way the walls were built and the height of some of them!

This is the doorway we came through…

I wonder if all of the walls were as high, here, only heaps of rocks remain. 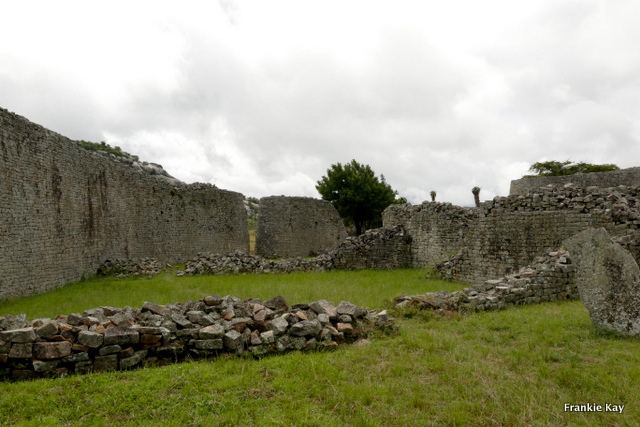 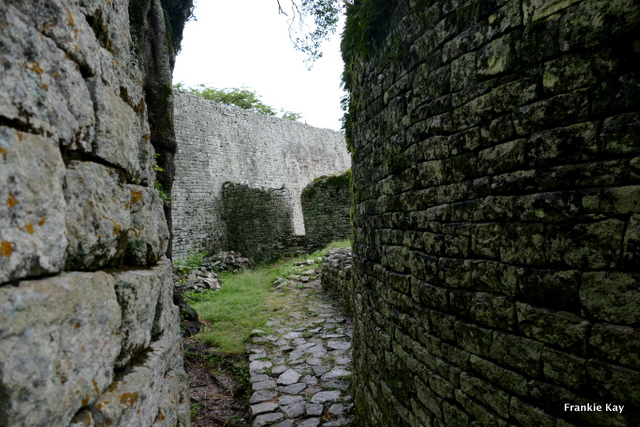 I took a pic of this passage…

Before realising that it didnt give a good enough impression of the height of the walls..

PS – love the tree! (Closeup, below)When I saw this tree, I immediately thought of Suki Viljoen who ruthlessly hugs trees in the UK while I take up the slack here in Zimbabwe!

Seems its not a tree – its a colony!

Ive posted this pic again, taken from the hill complex as a reference – the conical tower is not easy to see. (Its under the trees at the far left back of the Great Enclosure.) 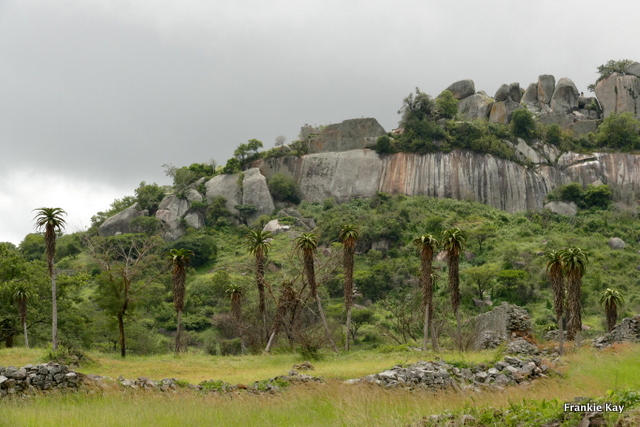 The above pic is taken looking through the walls of the Great Enclosure. The aloes in the foreground must look awesome at the right time of the year.

There are several stone entrances at Great Zimbabwe. This one on the Hill Complex.

Close up of the beams. What’s amazing, is that the beam is a cylinder and made of a different material to the walls. The rock they chose for that beam is pretty hard (probably serpentine.)

Considering they have a whole wall to hold up above, they would need to be!

Our client this week lives in Gutu, very near to Great Zimbabwe and also close to a friend whom I met via Facebook. So it was easy to plan a trip to Great Zimbabwe and the areas surrounding Masvingo. However, from Wednesday onwards, the temperature dropped and dropped (it was 13 deg C on Saturday!!!!!) and we awoke on Sunday morning to “Guti” the word that describes mist that occasionally hardens to rain. It doesn’t do much, by way of precipitation, and messes up my photos!

We went to Great Zimbabwe Monument anyway and only once or twice did I have to wipe moisture off my camera.

I wonder if the slight mist enhances the feeling of mystery one feels walking around the ruins.

I think, when I took this pic, (above) it was to show the thickness of the walls. The boulders are huge – look how tiny I am compared to the rocks in the photo below… 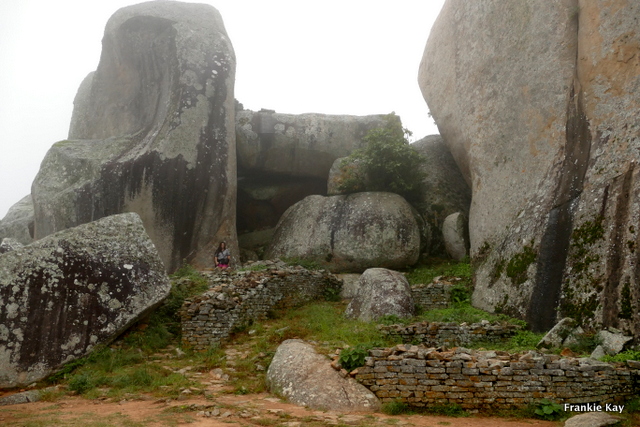 I took hundreds of photographs and will need to make several blog posts to do a decent job of showing the ruins. All of these are taken from the “Hill Complex.” In the pic above, you can see how the builders used the massive granite boulders to built into, and also how they often narrow down the paths into bottle-necks. I guess all security features.

Its only the climb up to the Hill Complex that is steep – once up there, the steps are mostly short, although the passages narrow.

Below is a short video of me walking through one of them!

The view of the “Great Enclosure” is pretty good from the “Hill Complex” and we used the “ancient path” to climb down. 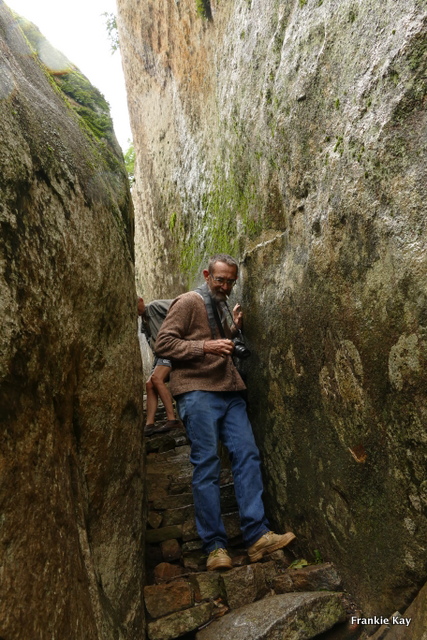 Its quite a gradient and we had to pick our way carefully, especially as the steps were slightly wet. 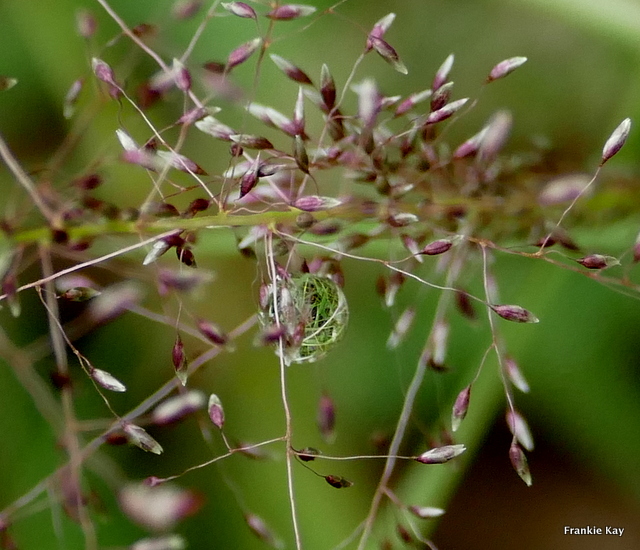 Maybe in my hair? 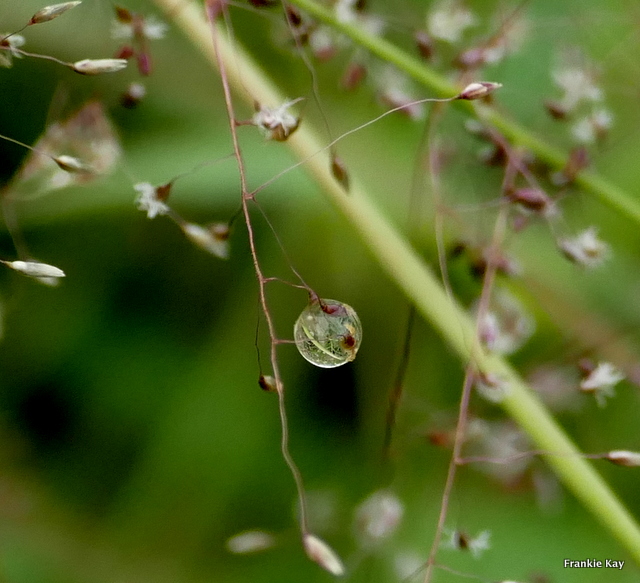 PS – Ive been learning how to use the aperture priority setting on my Panasonic Lumix FZ1000! All these pics were taken using this setting and with the macro facility on.